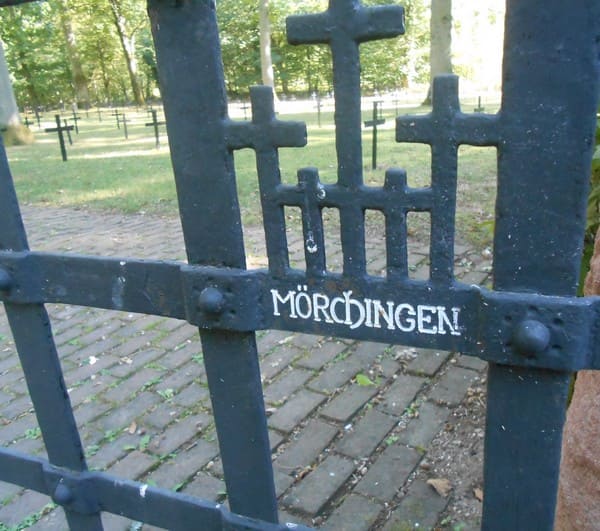 Access by the path which is at the level of the sign for the entrance to the town.

It is in Moselle that the first days of the First World War conflicts took place with the battle of Morhange, August 19th and 20th, 1914. A commemorative monument, erected in memory of fallen soldiers, stands on the valley of Morhange and invites to contemplate. Lifted during the interwar period, it was destroyed in 1940 by the Germans and rebuilt at their own expense in 1964. On the spot, an orientation table dominates the battlefield and makes it possible to visualize the movements of the troops.

It was created in 1893 by the German army for the burial of frontline soldiers. In fact, Morhange was the first German city after Metz in annexed Lorraine. 4,754 German soldiers lay there, mostly in two ossuaries. Part of the cemetery is a civil cemetery containing around thirty graves of German citizens who died during the annexation of Alsace-Moselle. The iron crosses of the individual graves of cemetery 14-18 are aligned around a central alley at the end of which stands a wrought iron cross. On either side of the cross are placed two large ossuaries, burial sites for most of the bodies exhumed from small cemeteries or military squares from civilian cemeteries in 51 surrounding municipalities. Their names are engraved on bronze plaques. The cemetery was well maintained throughout the war and when the French state redeveloped it, the perpetual concessions were preserved at the request of the German state.

The National Necropolis of Riche, halfway between Morhange and Riche, is the most important French national necropolis for the battle of Morhange. It brings together the bodies of 2208 soldiers, including 577 unknown. The battle of Morhange in question took place from August 19 to 20, 1914 and left more than 8,000 dead.