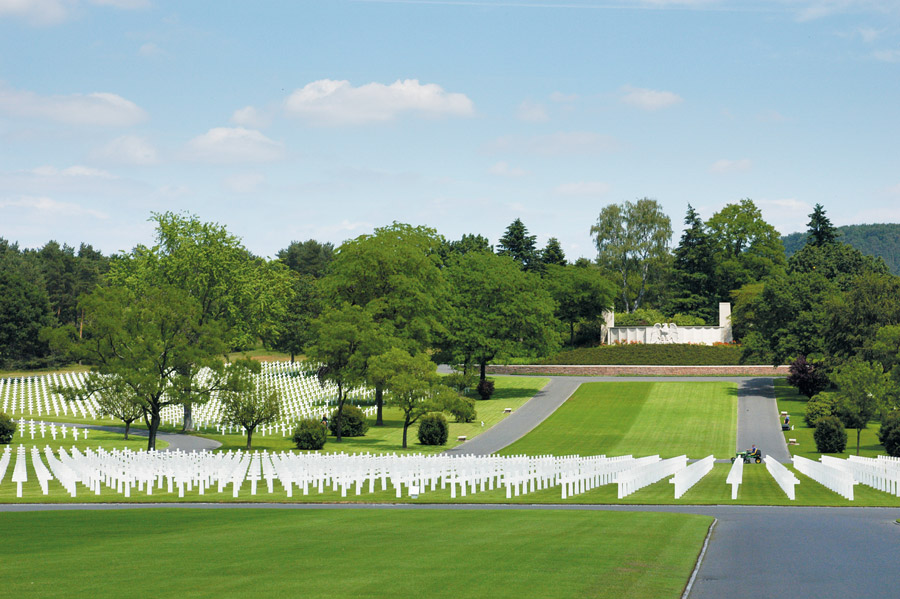 The American Battle Monument Commission (ABMC), established by law in 1923, is an independent agency of the Executive Branch of the US Government.

The Commission is responsible for commemorating the services and achievements of United States Armed Forces where they have served since April 6, 1917 (the date of US entry into World War 1) through the erection of suitable memorial shrines ; for designing, constructing, operating and maintaining permanent US military cemeteries and memorials in foreign countries, for controlling the design and construction of US military monuments and markers in foreign countries by other US citizens and organizations, both public and private, and encouraging the maintenance of such monuments and markers by their sponsors.

This cemetery covers 113.5 acres of rolling landscape on the west edge of the Saar mining region. The surrounding area was liberated by the 80th Infantry Division on 27 November 1944. A temporary American military cemetery was established on 16 March 1945 about one-half mile to the south of the present location. The present site was chosen for the permanent cemetery due to its superior location. It is the largest American World War II cemetery en Europe. Free use as a permanent burial ground was granted by the French government in perpetuity without charge or taxation.

TO SEE ON THE CEMETERY :

You can meet the staff, have you questions answered and sign the guest book.

At the cemetery’s east end of the ground rises to a knoll with the overlook. From it, you can see the entire cemetery and the countryside for miles to the west.

The walls of the Missing

The wall of the Missing, upon which are inscribed the name, rank, organization and State of 444 men of the United States Army and Army Air Corps, extend to the north and south of the tower.

They gave their lives in the service of their country, but their remains were not recovered or identified. An asterisk marks those who were subsequently recovered. Their names include men from 43 different States.

At the end of the walls is this inscription in both English and French – “Here are recorded the names of Americans who gave their lives in the service of their country and who sleep in unknown graves”.

This tower, 67 feet high, is of Euville limestone from the region of Commercy near the Meuse River some 70 miles to the southwest. Its walls are carved with bold vertical figures. The dark stone of its base in Belgian “petit granit”. On the west façade is a sculptured roundel bearing the obverse of the Great Seal of the United States. High on the tower are three superimposed angels of Victory each bearing a laurel wreath.

Above the entrance to the memorial, carved from Euville stone, is a 26 feet tall figure of St. Nabor, another spelling of St. Avold, extending his blessing upon those who rest here or are commemorated on the Walls of the Missing.

Inside, on the left wall, is a large map in colored glazed ceramic portraying military operations in Western Europe from the landings in Normandy until the end of hostilities. A smaller map entitled : “From the Moselle to the Rhine” records the fighting in the region of St. Avold. Accompanying the maps are iscriptions of the detailed operations in both English and French.

Flanking the door, to the right, is the dedicatory inscription : “In pround remembrance of the achievements of her sons and in humble tribute to their sacrifices this memorial has been erected by the United States of America”.

On the west wall opposite the door are sculptured figures lighted from the north by a tall window. This group represents the eternal struggle for freedom, typified by the youthfull figure in the center. Flanking him are typical military and religious heroes who, throughout history, have taken part in this struggle : King David, Emperor Constantine, King Arthur and George Washington.

The graves area is reached by a broad flight of steps from the front of the Memorial. It consists of nine plots laid out about the axis in a symmetrical pattern, divided by gracefully curved paths. The headstones are set in straight lines in each of the plots. Stars of David mark the graves of those who professed the Jewish faith while Latin crosses mark all others.

These 10,489 Dead who gave their lives in ou country’s service came from every State in the Union, and the District of Columbia, as well as from Puerto Rico, Panama, Canada, the United Kingdom and Mexico.

One hundred and fifty-one headstones mark the graves of “Unknows”. Among the headstones are 28 instances in which two brothers lie side by side. Also, in one instance, three men whose names are known are buried together, and a bronze tablet on the grave recods their names. There are four Medal of Honor recipients whose headstones are inscribed in gold-leaf.

The cemetery is enclosed within a plantation of Scotch pine interspersed with groups of beech, oak and maple. Color has been introduced not only by the flowering shrubs but also by means of long borders of pink polyantha roses, both on the memorial terrace and flanking the central mall. Flanking the memorial are massive hedges of European beech backed by lindens.

In the graves area are informal groups of English oak, honey locust, white and red flowering hawthorns and pagoda trees. Flowering shrubs have been grouped in the open grass area and include hibiscus, philadelphus, hydrangea, lilac and buddlia.