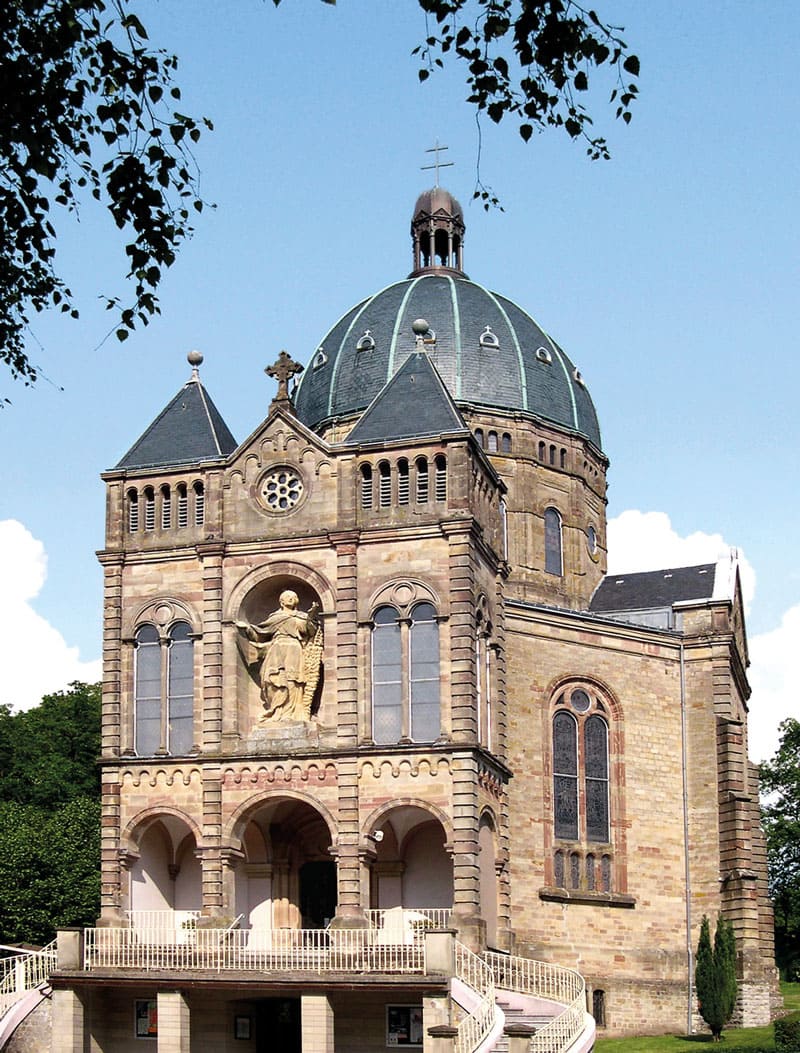 The small chapel of the 16th century was succeeded by a larger one which was looted and disused during the Revolution.

Rebuilt under the Concordat, it became a major place of Marian pilgrimage.

In 1889, a new bigger chapel was built under the control of Abbot Lemire and the inauguration gathered more than 5000 persons.

In 1932, it received the title of minor basilica by Pope Pie XI.

Above the portal stands the baroque statue of Hope dedicated to the Virgin Mary, which comes from the portal of the cathedral of Metz. It was made by the Namur sculptor Pierre-François Le Roy (1739-1812).

On the dome, the cross of Lorraine rises to a height of 33 meters.

The restoration of the Basilica :

A complete restoration took place from 2017 to 2019 thanks to the will and courage of Abbot Olivier Riboulot.

Works will be done in three phases :

On the entire building, there was a cleaning of stones and replacement of damaged stones.

The ceiling was renovated in 2019. The dominant colors are blue and gold in reference to the Virgin Mary.

The two main vaults, which were originally monochrome, have been dressed with a starry sky reminiscent of medieval polychrome vaults.

In the main choir:

The interior refit was entrusted to Fleur Nabert, a sculptor and artist.
Besides painting, new lighting and laying tiles on the floor, we will note :

It is located below the main entrance to the basilica, under the side stairs.

Place of celebration and meditation since 1950, the crypt gathers more than 350 ex-votos, objects or marble plaques deposited over the years by pilgrims in gratitude to the Virgin Mary for obtained graces.

See also : Stained-glass window of Arthur Schouler and the Pieta of Helmuth Muller.