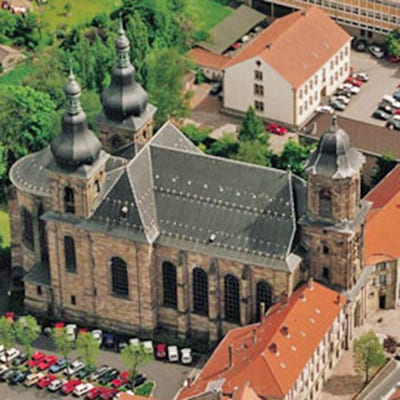 The onion-shaped domes, covered with slate, cap the three towers of the church and give the abbey a baroque appearance, yet the architecture of the building is classic.

It is an alliance between the medieval plan of a CHURCH-HALLE (the three naves of equal height) and the marked taste of the Enlightenment for the clarity given by the large picture windows.

The bell tower rises to 45 meters. The Abbey Church is the town’s emblem.

Overlooking the church square , the so-called STATUE OF FAITH (or of religion) comes from the classic portal of the Cathedral of Metz, a portal due to the architect BLONDEL and remodeled in 1898.

The city developed around the abbey which was founded in 722 by Sigisbaud, bishop of Metz and took the name of “Abbatia Sancti Naboris” when it received the relics of Saint Nabor from Chrodegang, bishop of Metz in the year 765.

The monastery “Abbatia Sancti Naboris” had a remarkable influence during the whole middle ages.

The Abbey Church was therefore rebuilt between 1755 and 1769, according to the plans of Léopold DURAND, an architect monk. When the Revolution of 1789 broke out, the Abbey Church was only 20 years old. Immediately the Municipality proposed to the Nation to exchange the abbey church for the old parish church of Saint Peter and Saint Paul, which stands at the other end of the square. The Abbey Church is saved. The cult of Rome was reestablished ten years later following the signing of the Concordat in 1802.

In 1906, the archpriest NICOLAS DICOP (died in 1929) arrived in Saint-Avold. In a few years, he transformed the sober 18th century abbey into a Lorraine ebermunster where the Bavarian baroque decorations will shine in the stucco and gold.

Archpriest DICOP’s baroque work was reduced to nothing on November 9, 1944 when an American bomb fell on the square of the transept. The central dome and the vault of the north spider crumble, the northern pillar is shaken, the stained-glass windows are blown out, the walls are riddled with splinters, the woodwork of the choir is torn off, the canvases ragged, the frescoes mutilated and the plaster cracked will have to be destroyed.

The organ, the great organ of Saint-Nabor is fatally damaged, the baroque pulpit, pride of the priest DICOP is crushed by falling materials.

The restoration will be long, difficult, expensive; it will last until 1970. All this work has restored the church to its original purity. The beautiful pink stone from the Saint-Avold quarries has at the same time found a new lease of life.

The woodwork of the choir

The woodwork of the choir, sculptured between 1755 and 1762 by Jacques Gounin and heavily damaged by the bombardments during World War II, was restored a first time between 1954 and 1970 and a second time during the winter 2009/2010.

The original paintings were destroyed during World War II. Only the painting representing the Assumption of the Virgin attributed to the local artist JOSEPH MELLING (1724-1796) could be restored.

THE PAINTING “LE CHRIST EN CROIX” – “CHRIST ON THE CROSS”

Since 1866 the hall of the Assize Court of Metz has housed this painting representing the crucifixion of Jesus Christ (dimensions: 3.50m x 1.70m). It was made on the model of a work by Van Dyck and attributed to Jean-André Rixens.

In 1999, a lawyer from Metz, Maître Daniel Delrez, considers that “the presence of this painting is unacceptable in a place where justice is dispensed. Apart from the religious aspect, a man nailed to a cross is not the kind of image you want in a courthouse “. Pending a final decision, the painting has been covered with a curtain.

Since April 30th, 2010, the “Christ on the Cross” has been withdrawn from the assize court and occupies now a place in the choir of the abbey church of Saint-Nabor where it replaces the destroyed old painting “the Resurrection of Christ”.

Dominating the choir, you will notice a niche in which Saint-Nabor, wearing the breastplate of a Roman legionary, waves his spear. This sculpture was probably made in the middle of the 18th century and restored by Abbot Dicop at the beginning of the 20th century and a second time in 1995.

The pulpit was set up at the beginning of the 20th century at the request of Abbot DICOP. It presents a profusion of ornaments. The preserved part is a fragment of the support, it is in oak. The theme develops the symbols of the evangelists: the lion for Saint Mark, the lying ox for Saint Luke, the angel for Saint Matthew (his wings serve as a background for the scene) and the eagle deploying its wings for Saint John.

Since the Middle Ages, Saint Nicolas was the subject of popular devotion in Saint-Avold. The powerful corporations of merchants and butchers, founded respectively in 1481 and 1486, placed themselves, under the protection of this saint. Since 1921, a fair has been organized every 1st Monday in December. 2.05m high and 80kg heavy, this statue is carved in oak wood. Our Naborian Saint Nicolas was made in 1773. It was transferred, like all the other statues, from the ancient parish church Sts Pierre et Paul to the abbey church after 1792.

The statue of St Nicolas was first installed in the eastern arm of the transept at the site of the current altar of the Virgin. After the works carried out in 1892, it was installed in the western arm until November 9th 1944, when an allied bomb damaged the collateral altars.

If our statue miraculously escapes destruction, it suffers the loss of its crosier and minor damages.
After a summary restauration, it was put back in place until 1960 and finally stored in the sacristy where it suffered the ravages of time until 2002. Restored by the municipal services, it was reinstalled on December 5th 2003.

In polychrome wood and rhenish inspiration, the calvary dates from around 1500. Christ on the cross is surrounded by the Virgin and the apostle John, placed on consoles, molded and decorated with foliage.

THE CROSS: the four branches of the cross end with elements in the shape of a quatrefoil, on which appear the symbol of the evangelists shaft:

It is a classical French style organ built in 1770-1771 by the organ builder Barthélémy CHEVREUX. The two wooden Atlas’ that stand on the wooden turrets represent the allegory of youth and old age. The whole decoration is late Louis XV style even Louis XVI. The organ case was sculpted in 1769-1771 by Jacques GOUNIN. This organ was also a victim of the bombings of 1944. It was renovated and inaugurated on April 26, 1987. It has 4 keyboards, 1 pedal board, 39 stops and 2,407 pipes. The pipes are made of lead or tin. Mechanics are in oak wood.

The theme of the “Entombment” was very popular in the 15th century because of the misfortunes of the times, the idea of ​​suffering and death dominated the devotions of the faithful.

The group of Saint Nabor leaning against the western wall of the left aisle, carved partly in sandstone and partly in Jaumont stone, was made around 1500. It is in the rhemish style because of the two soldiers who are sleeping at the base of the sarcophagus. They represent the guardians of the tomb.

It features around a dead and ready to be buried Christ, Joseph of Arimathea and Nicomedes represented as handsome bearded old men holding both ends of the shroud.

THE RETABLE OF THE VIRGIN

This altarpiece is enclosed in a molded frame, it is carved in a beautiful yellow limestone. It dates from 1460.

The sculpture is somewhat naive. It stages four sequences from the life of the Virgin:

on the left: the ANNOUNCEMENT: the Virgin joins her hands and bows down before the angel who greets her.

right: ADORATION OF THE SHEPHERDS: the Virgin is standing in front of the Child lying in his straw cradle, Saint Joseph, represented as an old man, is seated outside the sheepfold. In the background appear the shepherds.

in the center: THE DORMITION: Mary has just died, lying on a bed with folded sheets, her body is surrounded by Jesus Christ, an angel, and the sorrowful apostles.

above: a tiny composition represents the ASSUMPTION of the Virgin, the taking up of Mary in to Heaven by two angels.

They were produced from 1968 to 1971 by the Naborian master glassmaker ARTHUR SCHOULER. They replace those installed at the beginning of the century by the Zettler factory in Munich, blown up by the bombardment of 1944. There are 16 windows on a surface area of ​​420m².

The stained glass windows in the nave illustrate creation and the four elements water, earth, fire and air.